Ebad Bin Siddik (Bengali: ইবাদ বিন সিদ্দিক) was born on 5th February 1993 at Kamalganj in Moulvibazar. His father’s name is Ali Akbar Siddik and his mother’s name is Shamsunnahar Chowdhury. Ebad Bin Siddik has been writing since childhood. He is also a graphic designer and web developer and founder and CEO of popular IT services company Syltech Creative Agency (www.syltechbd.com).
His first book ‘ Apnar Somipe Jaha Bolite Cai (What I Want to Say to You)’ was published in Amar Ekushey Book Fair in 2020, (ISBN 9789843484139). The book has received a positive response. He is also a regular contributor to magazines and journals. He also writes regularly on online news media to create social awareness. He worked as a journalist in electric media as well as print media such as Daily Bijoyer Kontho, Ekushe Journal, Public Voice 24, Sylhetian etc.
Besides this, Ebad Bin Siddik a young entrepreneur. He provides free training on graphic design and websites for human employment. Many have learned to work from him and have found a way to earn an income. He always does social work and tries to inspire and motivate people on social media to think clearly and improve their skills.
Ebad bin Siddik has triple masters in Islamic studies. He completed his masters degree from Islamic University Dhaka in 2019, from Leading University in 2020, Bangladesh Qawmi Madrasa Education Board in 2012 . He has studied from three different lines of education in Bangladesh. He has also studied Arabic language for one year from Darul Maarif, Chittagong.
Currently, Ebad bin Siddik is working on his own business. He hosts and appears on an online TV show. He feels comfortable introducing himself as a writer. Writing and journalism is his first choice. He expresses his thoughts on society in his writings.
email: mail@ebadbinsiddik.com
web: www.ebadbinsiddik.com
buy book : https://www.rokomari.com/book/197875/apanar-somipe-jaha-bolite-chai 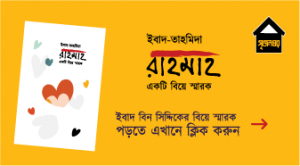